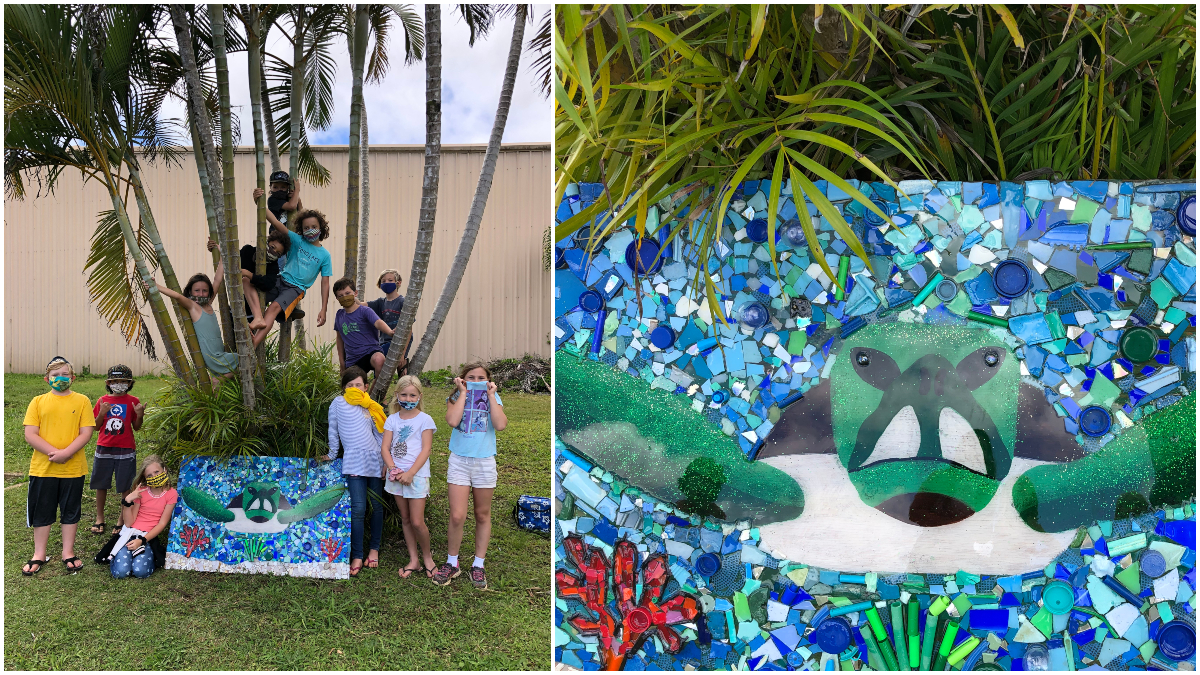 According to the Natural Resources Defense Council, our oceans cover 70 percent of our planet. Oceans affect our weather, air, food and all life on the planet. Due to carbon emissions, plastics, oil and other human waste, our oceans’ health is degrading at an alarming rate. In an effort to combat this phenomenon, Alaka’i O Kaua’i facilitator Ashley Giunta and her 3rd graders accepted a challenge.

Their driving question, according to Giunta, was “How can we protect endangered species in our area?” Giunta and her learners wanted to bring awareness to the estimated eight million tons of plastic dumped into the world’s oceans every year and how this directly affects their local endangered sea turtle population.

In partnership with the Kauai Chapter of the Surfrider Foundation, Giunta and her learners spent weeks collecting 270 pounds of plastic from their local beaches and ultimately transformed the reclaimed plastic into an art exhibit.

Giunta said the impetus for the project came from a learner interest survey. “Many of our 3rd graders attended a local summer camp, Reef Guardians, and wanted to extend their learning,” Giunta said. Once the topic was chosen, Giunta customized project design elements from a similar project at PBLWorks and launched the project for her learners.

Giunta said the learners did initial research about the threats facing their local endangered sea turtle population. They recorded their scientific findings and compared them with data from other ecosystems around the world. Learners collaborated to discover why their local sea turtle population was no longer thriving and how they might take action to protect the species.

Giunta said the learners were also challenged to inspire their community to take action. “This is where the plastic art installation idea was born,” Giunta said.

In addition to the initial research, the beach cleanup work and the plans for the plastic art installation, learners also wrote letters to Congress advocating for wildlife protection and produced individual reports on other local endangered species, including the green sea turtle, hoary bat, monk seal, nene goose, and shearwater bird, among others. The learners wrote informational and persuasive writing pieces, did a virtual field trip to a bird sanctuary in Kilauea and planted an ohia tree on campus.

Giunta said she was proud of all the work the learners completed and how committed they were to the entire endeavor.

“They learned how to use their voices and to advocate,” Giunta said. “They also learned how things like art can serve as a symbol for change and awareness.”

Giunta said one powerful element of the project was their partnership with Surfrider, which helped the learners fully realize the impact of plastics on the oceans and the planet. The learners even had the opportunity to add their findings to the Surfrider Foundation worldwide database.

“From Surfrider, we learned about ocean-friendly gardens, restaurants, household products, and how we can reduce our carbon footprint by just changing a few routines in our own lives,” Giunta said. “The students were even challenged to pack a no-waste lunch and were rewarded for their efforts.”

Giunta said the feedback from the entire school and community has been overwhelming. The community has embraced the learners’ public work by displaying the art at the Warehouse in Koloa, along with purchasing over 400 greeting cards featuring the artwork. All funds are being donated to help local organizations who work to save endangered species.

In addition to the tremendous impact on the community, Giunta said the most powerful aspect has been that the learners want to continue this work long after the project is over. Many learners are extending their learning and commitment by registering for Reef Guardians Camp this summer, by taking weekly beach hikes to collect plastics and other litter, by challenging one another to bring no-waste lunches and snacks to school and by continuing to upcycle plastics and other found items.

“Our learners have been inspired by this work and are making permanent changes,” Giunta said. “And our entire community has taken notice. I think our school was so inspired that they might make this a tradition.”