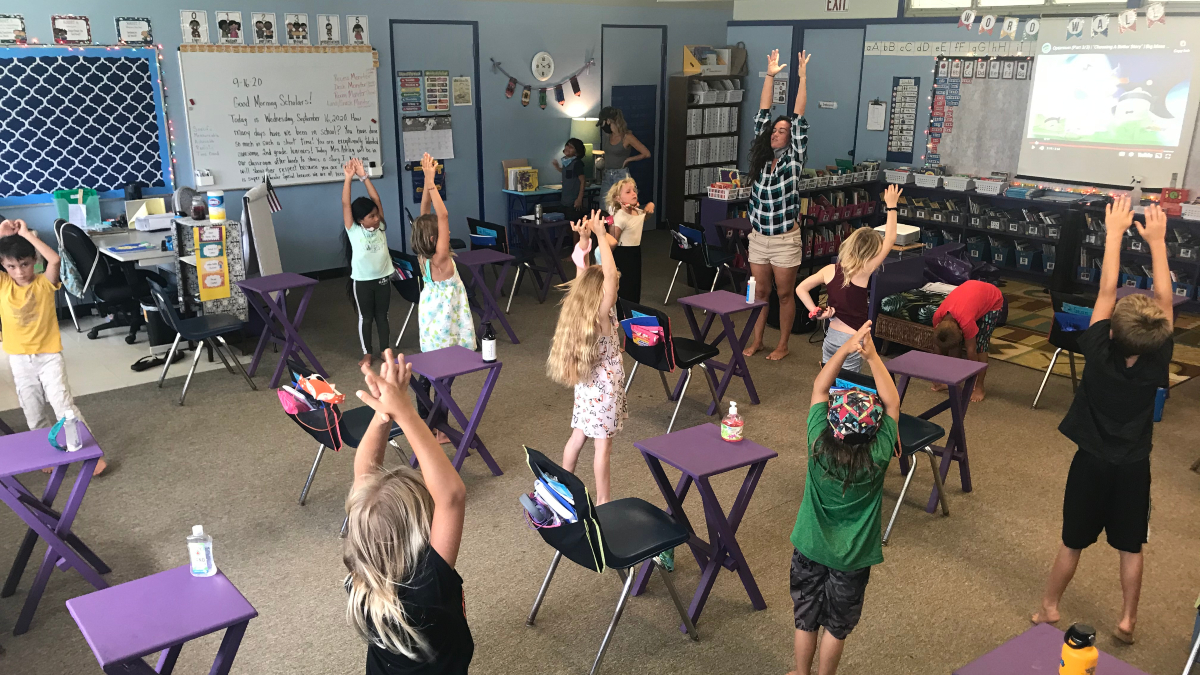 For educators, an important part of the role is establishing classroom expectations and culture. Some educators develop their own systems, some implement a school-wide plan, and others use practices developed outside of education. Regardless of which approach an educator chooses, the question always remains: How do we encourage all our learners to adopt classroom expectations and culture?

Alaka’i O Kaua’i 2nd grade facilitator Joeanne Mick, who along with the rest of her school community embraces Stephen R. Covey’s 7 Habits of Highly Effective People, has arrived at an effective answer.

While many educators introduce the norms at the beginning of the year and periodically remind the class, Mick instead makes the 7 Habits a yearlong project. According to Mick, the election year of 2020 inspired the following driving question: “How can I be a responsible citizen and help others be responsible citizens?”

The result was more than a project. According to Mick, it became an effort to continually learn and use the 7 Habits. Mick said she wanted all her learners to reflect on what it means to be an active and engaged citizen in the classroom, at school, in the local community, in Hawaii and even globally.

“I wanted them to have a deeper understanding that led from learning words to taking action,” Mick said. “The 7 Habits are really a philosophy, a mind-set and a way of life. I wanted them to see them that way.”

In Mick’s classroom, the 7 Habits have taken on a life of their own. In January 2021, the learners established an economy, a voting system and an entire culture based on the 7 Habits. There is now a learner store — stocked with family-provided merchandise — that allows learners to purchase items with currency known as Mick Money, which they earn in class for such accomplishments as completing assignments on time, being ready to work and volunteering inside and outside of class. From this income, each learner must pay 25 percent on rent and 15 percent on taxes, and the rest can be spent at the store. The learners earn a dollar a day for attending and can earn additional income for serving the classroom and community.

“The learners are really getting it,” Mick said. “They are asking to do extra jobs, such as sweeping the sidewalks, to earn extra money.”

In addition to the classroom economy and other systems, the learners’ 7 Habits work has extended to field trips, partnerships with outside nonprofit organizations like Surfrider Foundation, creating slideshow presentations like the one below and even creating a puppet show they’ll soon present the 7 Habits to the entire school.

Mick said parents have been enthusiastic about the 7 Habits work and have seen the impact on their children. They love that the learners have taken ownership of the classroom and the store. She said they are often impressed with the learners’ level of responsibility.

“The learners understand what each habit means and how to set goals for themselves,” Mick said.

Recently the learners memorized the song “Leader in Me” and have now decided to record their own version. With Mick’s support, they even recently paid the royalties to use the song.

Educational aid Whitney Backus said she, too, has enjoyed seeing the learners embrace the 7 Habits and has found herself doing a lot of self-reflection as well. “I love that we are doing this the entire year,” Backus said. “It helps my life and my support of the learners.”

Others have seen the growth in the learners over multiple years. iLEAD Director of Curriculum, Instruction and Assessment Linda Krystek, who has worked closely with Alaka’i O Kaua’i from its first year, noted that Mick’s class includes many learners who were part of the school’s founding kindergarten class.

“It’s exciting to see how these young learners have grown into school leaders while developing 21st-century skills,” Krystek said. “By incorporating social-emotional learning into project-based learning, these 2nd graders have developed into articulate, self-directed learners.”

Alaka’i O Kaua’i Director DJ Adams is also proud of the work that Mick and her learners are doing. According to Adams, through the efforts of the learners, the 7 Habits are now firmly embedded into the culture of the school.

“Through their presentations and continuous efforts, these learners have created true cultural change at our unique school,” Adams said.

In addition to the upcoming puppet show and other year-end activities, these 2nd graders are going to finish the school year with one more event with Surfriders focused on cleaning up their local beaches.

Mick said that she is learning a great deal about the 7 Habits herself. “I am learning to delve deep into the 7 Habits and see what they really mean to me as an adult, a facilitator and a citizen every day.”